Well I have returned from Des Moines and Denver,

and have to say it was a good trip. No disasters, got to see some homies, and even hang out with my brother, Ames, who helped me out for the first leg of the trip…

Thissa view from out the back of the booth in Des Moines. The show was situated around a beautiful sculpture park, and the weather was pretty dreamy, though gusty, which is not great for a tent. One guy lost all of his work pretty much. I saved a big bowl AKA “Mongo” from smashing unto the ground because of wind + pedestal + tent wobble. The show was open until ten at night, so i was able to get a few good shots as the crowds died down..

I see you, ghost. what it like when you cant touch my pottery?

You can see here I took almost all new work, which was exciting, but I didn’t really know what would sell, what would bomb. Didn’t sell any tall baskets, which were my favorite new forms. People really reacted to the low wide cylinders (AKA Mongos), which is good because i like them too.

veiw out the front of the booth across the row

You can see a big boy there, on the pedestal just past the bud vases.

Anyways, it was on to Denver from there to the Cherry Creek Arts Festival, which was also a successful show! I was able to stay with a good buddy of mine, AND my wife met up with me there. We also were able to take some weird photos. This one was in the dark at night, but with a very long exposure. Never thought these would turn out like this… 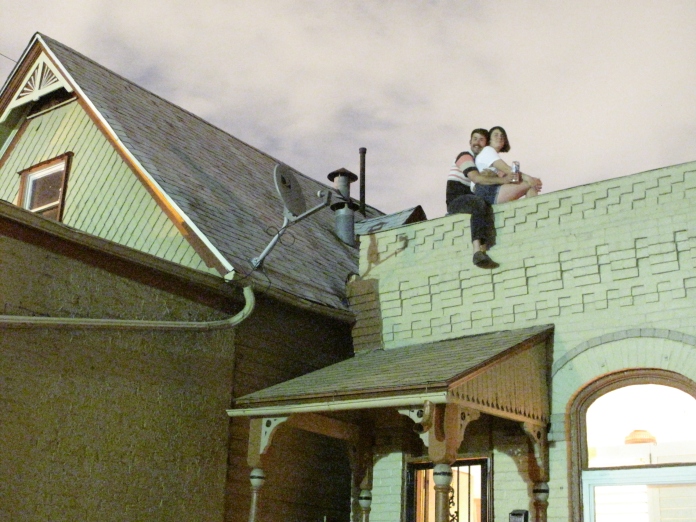 That’s us on the roof there. Looks like a weird technicolor wonderland…

I am back in the studio now, working on some new mugs I am excited about, and re-visiting some pitcher and teapot forms I dabbled with in the spring.

The studio has been somewhat quiet, but only because everyone had their/our heads down working like crazy. I will keep this updated with new work and it is being developed. And two more things…

Visit Mudfire.com where I still have a nice batch of work for sale!!

the website address for my work is exactly: http://www.mudfire.com/anderson-bailey-ceramics.htm

THIS IS WHERE JESSIE AND I ARE SHOWCASING AND PROMOTING OUR NEW COLLABORATIVE LINE OF SLIP-CAST FUNCTIONAL CERAMICS!!!!

It is very special.